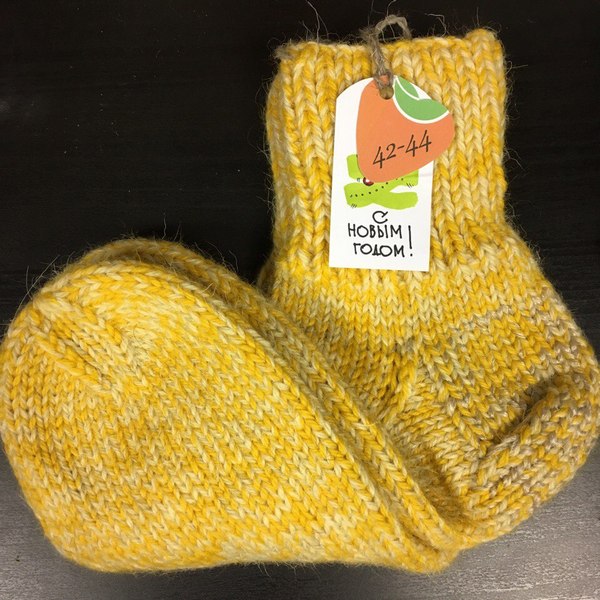 We have put together everything that was collected during the New Year’s presents campaign and ended up with over a tonne of presents for homeless people! To give out the presents our volunteers have made 500 gift sets made of food, toiletries and warm clothes. These will be given out throughout the following week at all Nochlezhka’s sites during the opening hours. Presents will be given out in advance at Night Bus stops and at the Counselling Service, while at the two heated tents and the shelter on Borovaya Street, they will be given out on New Year’s Eve. Whatever food and toiletries are left after New Year will be given out after the holidays.

Volunteers who took part in the Khurma (Persimmon) project led by journalist Nastya Dmitriyeva knitted 350 sets of warm clothes for homeless people. Each set included a scarf, a hat and a pair of socks. ‘Our project was joined by people from St. Petersburg, Moscow, Petrozavodsk, Orel, Ufa, Krasnoyarsk, Tver’, Berlin, Tallinn, Tikhvin, Rostov-on-Don, Nizhny Novgorod, Dubna, Vologda, Novomoskovsk, Sebastopol and a few other towns and villages. The youngest participant to make a scarf was 11-year-old Varya from St. Petersburg. She had to restart three times before she was pleased with the result. As for collecting and sorting out the gifts, we had six young volunteers aged between 15 months and 7 years’, – says the coordinator of the project Nastya Dmitriyeva.

‘This was a record-breaking New Year campaign for us. Time and time again we went to the collection points to pick up the food and toiletries but people kept on bringing more! There were many touching moments, for example, when the Luga canning plant offered a large batch of canned meat for our campaign. One company which was unknown to us had their own idea for the presents and donated 50 kg of bananas. People organised collection points at nurseries, schools, after-school clubs, private companies and state institutions to give presents to homeless people. This a very precious achievement of 2016, people from all walks of life sympathised with homeless people and tried to help. We would like to thank everyone who took part in this year’s campaign. Whether you only donated a pack of biscuits or an entire box of food, you all made a difference’, says Victoria Ryzhkova, the coordinator of the New Year’s project.