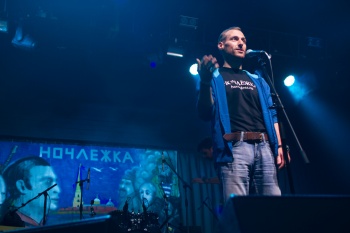 The musicians regularly support Nochlezhka, the oldest homeless assistance organization. All funds raised from ticket sales will go to fund the work of the largest homeless shelter in the city. With the help of lawyers and social workers of the organization, the shelter's tenants solve their problems, and most of them return to the normal life. Only in 2013 165 people, who lived in the shelter, received  full social and legal support.

By purchasing tickets, you do not pay the musicians or the club, you pay the Nochlezhka's expences for the rehabilitation of homeless people in the shelter on Borovaya str. 112 B.

The entrance ticket costs 800 rubles = 3 days of a homeless person living in a shelter;

VIP-ticket costs 1600 rubles = 6 days of a homeless person living in a shelter;

VIP-ticket costs 2,000 rubles = 9 days of a homeless person living in a shelter.

The first two NochlezhkaFest's in 2012 and 2013 raised over 1.5 million rubles in total. This was enough for 4.5 months work of the shelter and for rehabilitation of more than 250 people.

"Every year the support of our festival is becoming more powerful. We are supported by the musicians, and the audience, and by businesses. This is an encouraging trend – the society begins to notice the homeless people and look for ways to help them to return to the normal life. The more people this year will come to listen to their favorite rock musicians, the more homeless people we'll be able to help, "- says Grigory Sverdlin, the director of the St. Petersburg NGO Nochlezhka.

"The climate is not suitable for year-round open-air's, so if you have the opportunity to help the homeless, it should be done, if this is no longer possible — then you are the one who needs help" - says Ilya Razin, the lead singer of the Poles.

NochlezhkaFest partners this year are the engineering team Strojproect, the grocery delivery company Doma Vkusnee, and the hostel network Friends.