Main
Новости
Nochlezhka launches a special project ‘Their Own Fault’

Nochlezhka launches a special project ‘Their Own Fault’ 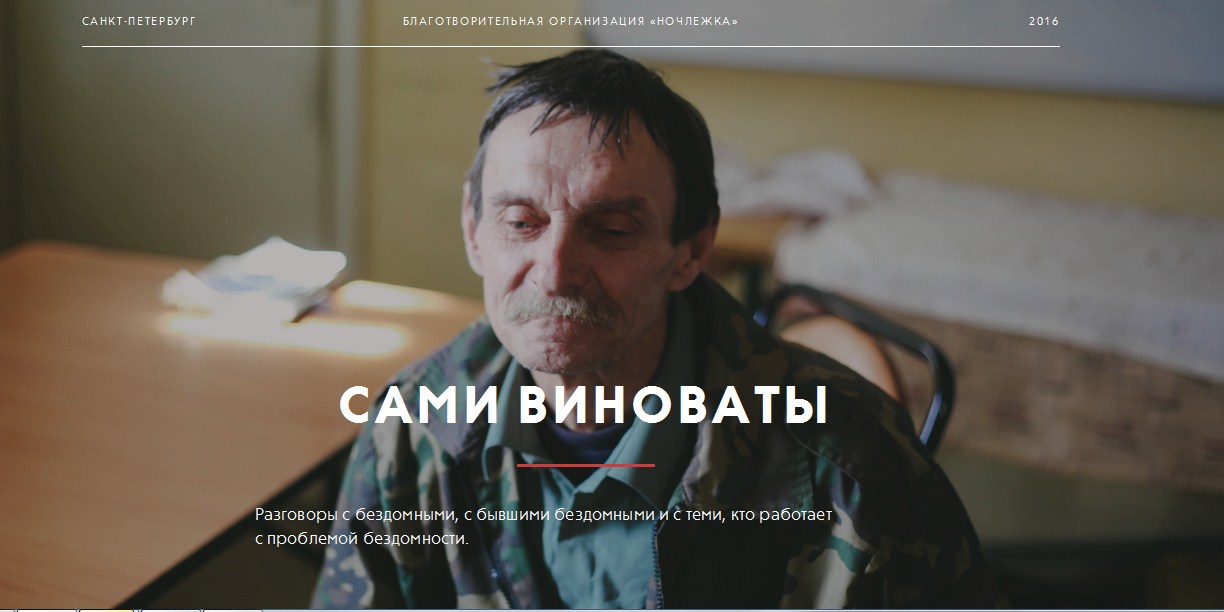 Today, Nochlezhka has launched a special project on its website called ‘Their Own Fault’. It is a series of talks with the homeless, doctors, social workers, and other people who are familiar with the issue of homelessness.

‘Their Own Fault’ project is not just people's biographies but very personal conversations about what these people like, what they believe in, and why they ended up in their current situation or why they chose to work in this difficult area.

The authors of the project are Nochlezhka's volunteers, journalist Nastya Ryabtseva and programmer and designer Pavel Povoroznyuk.

‘It's their own fault’ is a phrase homeless people hear a lot instead of getting help. The authors encourage readers to think to what extent the life that Nochlezhka's clients have is of their own making and whether it is something they have chosen themselves.  For instance, did they choose to be orphans and to be brought up in an orphanage? Or to be born in dysfunctional families? Was it their decision to choose the death or betrayal of their closest people? Or life in the country where anyone can become a victim of a real estate fraud? Or did they choose to suffer from congenital alcoholism or a serious disease which stops them from working?

‘Their Own Fault’ is an attempt to debunk a widespread stereotype about the homeless, the myth about it being a personal choice to be homeless. According to Nochlezhka's statistics, only 2–3% of all homeless people deliberately choose to live on the streets.

‘I think first of all, this project is not about the homeless but about people and their complicated lives. About the fact that despite everything, people live, love, help each other, and believe in a different life... I believe it's ridiculous to divide people into "homeless" and "normal". (That is why on the project's main page we don't indicate in any way which interviews are with homeless people and which ones with Nochlezhka’s employees.) The path to help and acceptance lies through understanding and empathy. To empathize with someone's story and to not judge you cannot just glance at the issue or have an overview, like we often do. You have to look closer, learn more, and understand. This project is an attempt to get to know each person we interviewed better. And personally for me some conversations in this project were real treasures’, says Nastya Ryabtseva, a co-author of ‘Their Own Fault’ project.

Read the project "Their own fault"