Main
Новости
"Marble people against stony hearts" on the streets of St. Petersburg

"Marble people against stony hearts" on the streets of St. Petersburg 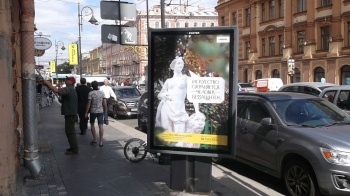 Starting from today there will be social advertising of Nochlezhka appearing at 30 locations in 10 districts of St.Petersburg. Posters will feature the slogan ‘Marble people against stony hearts’. They appeal to residents to show compassion to the homeless and to support the work of Nochlezhka.

This charity event organised by Nochlezhka was held in September 2013 in the Summer Garden. You could find text adjacent to famous marble statues with a ‘direct speech’ style of message. Statues said to guests: ‘To stand on the street is easier than to live on it’, ‘Art is protected. Human is defenseless’, ‘Even the statue overwinters under roof’, ‘Not to be indifferent is a real art’, ‘When people are screaming for help, even a stone speaks’.

Social advertising of Nochlezhka will appear at 30 other locations in the city in August. The advertising place is provided free of charge by agencies Poster and Advertising Centre.

The charity event in the Summer Garden and the Nochlezhka advertising project are developed on a voluntary basis by advertising agency Great.

‘The statues are like the homeless people who are always outside at the open air. It is common thing for people to watch these statues, but everybody turn their faces away from the homeless. We decided that it is exactly ‘the marble people of St. Petersburg’ who can tell people about the homeless needing help’ Dmitry Makarov, creative director of advertising agency Great.

‘It is getting harder to remind citizens about problems of homeless during the summertime than in the cold season. In this way we are grateful to the professionals in advertising sphere who supports us for a long time now. This advertising on the streets of the city will help us raise funds for the hospice and to engage with new volunteers’ Gregory Sverdlin, director of Nochlezhka NGO, St.Petersburg.