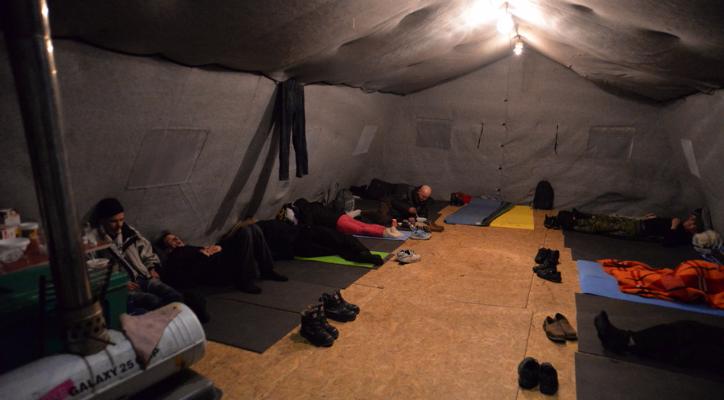 Tonight, Nochlezhka will open two heated tents for the homeless. The first one will be put up near 10, Mineralnaya street near Finland Train Station, the other one – at 8, 9th January avenue, behind a bus stop. Both heated tents will be open fr om 8 p.m. until 8 a.m. until 31 March.

Nochlezhka’s Heated Tent can accommodate up to 50 people and anyone can spend a night here, safe and warm, and have dinner and breakfast.

This season Nochlezhka has been running a heated tent since 2 October on Vasilievsky Island. 18-20 people sleep in this tent every night. 75 different people used the tent during the first month: some spent a couple of nights in the tent, others come every night. The heated tent on Vasilievsky Island is funded by the municipal budget as part of the Tvoy Budget 2016 project.

The Regional Jewish Congress in St. Petersburg Foundation and its president Mikhail Mirilashvili are covering the cost of hot meals for people coming to Nochlezhka’s heated tents. Neste is providing free fuel for the heaters. The rest of the running costs of these two tents is covered by private donations from people supporting the charity.

Nochlezhka would like to thank the administration of Kalinin district and the Centre for Social services of Frunzensky district for their help in opening the heated tents.

‘It’s fantastic that Nochlezhka is putting up not one, not two, but three heated tents for the homeless this season. But the need for accessible sleeping facilities for the homeless is huge. There should be at least one heated tent in each district of the city wh ere anyone can spend a night without any papers or certificates. This is the only way to protect the homeless from frostbite, amputations, injuries and death. It is the state that should deal with such a large-scale problem, no charity is capable of doing it’ says Andrey Chapayev, the coordinator Nochlezhka’s humanitarian projects.

According to the statistics provided by Petrostat, 1,910 homeless people and unidentified people died in St. Petersburg and Leningrad Oblast in 2016. In 2016-2017 Nochlezhka put up two heated tents: the tent in Frunzensky district was open from 1 November till 31 March and the tent in Kalinin district – from 1 November till 21 April. 721 people found shelter in these heated tents over the season and spent a total of 8,536 nights there. It is a good indication of the demand there is for such accessible projects for people in need.