On August 9 "Nochlezhka" will hold a concert of classical music 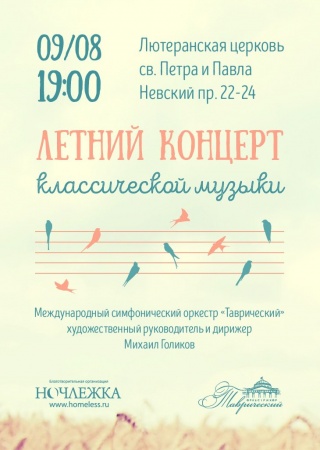 Entrance of 250 rubles (a donation at an entrance)

Soloists from China will become special guests of a concert: the pianist Shen Zhou and Yang Jing who will play the Chinese string instrument of Pipa.

Entrance on a concert – for a donation in favor of the charitable organization, the recommended size of 250 rubles. In advance it isn't necessary to buy tickets, on an entrance to church volunteers of "Nochlezhka" will collect donations in moneyboxes.

From 17.30 in Petrikirkhe the charitable buffet will take place : participants of Restaurant day will treat guests of a concert with coffee and pastries.

It will be the second classical concert of "Nochlezhka": the first time the organization tried such format in January, 2015. Then more than 800 people came to performance of the international orchestra "Taurian", and "Nochlezhka" collected 116 950 rubles. This money was enough for the whole 10 days of work of a rehabilitation shelter. One year of its work costs to "Nochlezhka" 4,62 million rubles. For 2014 rehabilitation in this center was undergone by 187 people who received full support of social work specialists, lawyers and psychologists of "Nochlezhka".

"To get out of the streets is very difficult, and homeless people need the help all the year round. Therefore our shelter works 12 months a year, and money for it's work is needed all the time. We try to make it easy and pleasant for the citizens to support homeless people during any season therefore decided to repeat a concert of classical music in summer as well", – Anastasia Sadovnikova, the coordinator of the projects of the charitable organization "Nochlezhka" speaks.

"We hope that masterpieces of classical music are going to sound at a concert, will remind each viewer of one of the main universal values – compassion. We daily face social problems: someone tries not to notice them, someone grieves and worries, trying to help. Fortunately, in the last decade the feeling of social responsibility even more often awakes in people", – Mikhail Golikov, the chief conductor, the art director of an orchestra "Taurian" speaks.