The Streets Barber visits Nochlezhka to give haircuts to homeless people 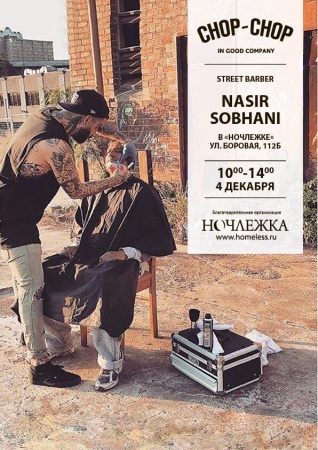 On Friday, 4 December, the world-known Streets Barber from Melbourne, Nasir Sobhani, will come to Nochlezhka's shelter to give haircuts to the homeless of St. Petersburg. The famous hairdresser was invited to the city by the Chop-Chop barbershop chain with a view to raising awareness about homelessness.

A team of barbers from Chop-Chop will be helping Nasir to work with homeless men during the working hours of Nochlezhka's counselling service, in a tent, installed and equipped specifically for this event in Nochlezhka's court yard at Borovaya street from 10 a.m. until 2 p.m.

Nasir Sobhani is a 26-year-old barber, who went through a period of drug addiction but has been sober for over three years. He works for the Medusa Hair Salon in Australia six days a week and spends his only day off on the streets of Melbourne, cutting homeless people's hair for free. Having overcome his addiction, Nasir found his calling in the art of hairstyling. When he is working with the homeless he gives them more than a just a new haircut: he gives them hope for a new life, inspiring them for changes. His altruism and talent have been commended by many international organisations (Daily Mail, BuzzFeed, Metro among others), while the barber himself writes about his mission and posts stories about his work on the streets on social media. He has tens of thousands of followers all around the world.

'We have volunteers who come to our shelter and serve people who live here but those who are currently on the street have nowhere to go to make themselves look more presentable. Everyone starts looking and feeling better with a new haircut, and this raises a homeless person's chances of employment. We are very grateful to Nasir for raising awareness about homelessness all around the world and for drawing attention to our charity while he is visiting St Petersburg' says the head of Nochlezhka, Grigory Sverdlin.