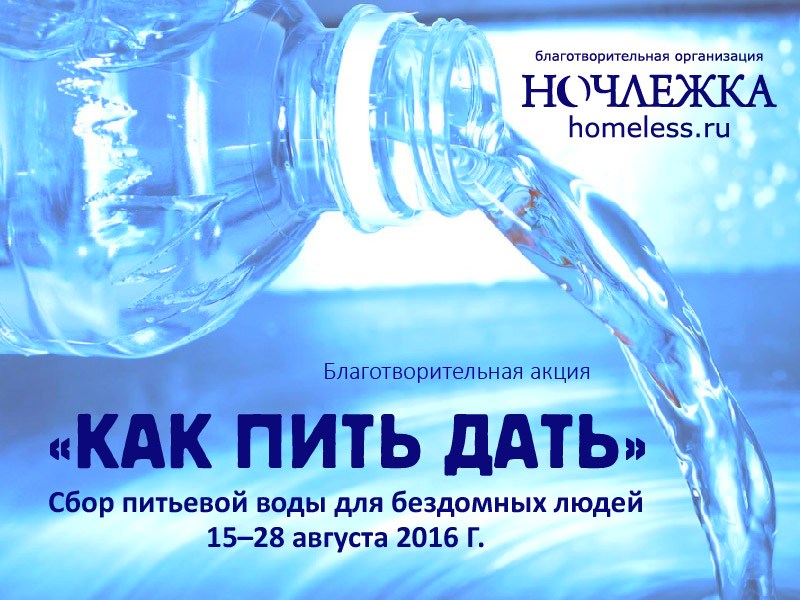 On 15 August the charity Nochlezhka launched a two-week campaign called ‘Let’s drink to that’, collecting drinking water for people in need. All donations will be distributed by Nochlezhka’s team and volunteers at night bus stops and at the counselling service.


‘Let’s drink to that!’ is designed not only to collect drinking water for those in need but also to raise awareness about this problem. Last year a similar campaign generated about a ton of water for homeless people of St Petersburg.


Anyone could bring some water to Nochlezhka at 112B, Borovaya Str. (entrance fr om Rastannaya Str. near house 1 (map)) on any day between 10 a.m. and 10 p.m. Plastic 0.5-0.6 l bottles with still water were preferable. Bottles of this size are easier to distribute, carry and fill up with water when possible.


‘There are no places in Saint Petersburg wh ere a homeless person could go to get some clean drinking water, wash or do their laundry. Homeless people don’t even have access to free toilets. They have to drink water from the rivers and canals of the city and then deal with the consequences for their health. There is nowhere at all wh ere they could take a shower because our city offers no free showers and homeless people are not allowed into public bath-houses. We all dislike the way some homeless people smell but we don’t stop to think that they simply can’t take a shower or wash their clothes’, says Grigory Sverdlin, Nochlezhka’s director.