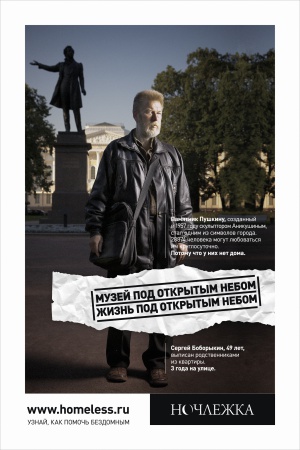 The charity organisation Nochlezhka’s public service ad “Open air life” won first prize in the category “Out-of-home advertising” at the international advertisement festival “P.O.R.A.”, which took place in Omsk. Eight posters showed homeless inhabitants of St Petersburg at famous historical places in the city where, grand Petersburg contrasted with a Saint Petersburg which is difficult to live in and which doesn’t care about its inhabitants.

“That “Open air life” was awarded first prize not only shows how professional its makers are but also that society has recognised the problem of homelessness. Without recognising the problem, it’s impossible to help those in need.” says Grigorij Sverdlin, director of Nochlezhka.

The photos’ models were inhabitants of the charity’s shelter for homeless people, which is situated on 112B Borovaia str. The artist behind the photos is the artist-photographer Iurij Molodkovets from the State Hermitage. Idea and copyright - Ivan Krasov. Design - Ishukov and Maksim Minin. From all our heart, Nochlezhka would like to thank the advertising company “Great”, Dmitrij Makarov and Igor Gulin, the company “Reklama-Centre”, as well as Zhenia Dzhurinskaia for their help and support in the making of the campaign. Without them, the project would not have been made. The posters can be seen at following address until the end of November: