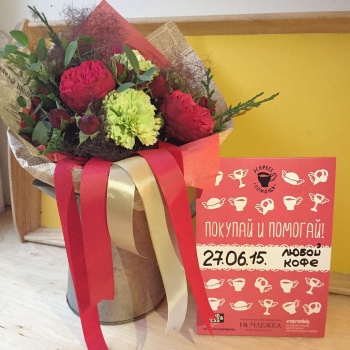 City institutions gathered 85 432 rubles in favor of "Nochlezhka" in "Exspress Aid". This money is enough to cover the week’s worth work expenses of the organization’s rehabilitation shelter which simultaneously houses 52 people,and is also a Social Service and “Nochlezhka’s” office space. The main costs of the shelter - payment of rent, maintenance and repair of buildings, utilities, salaries attendants and social workers and lawyers.

On June 27, 41 institution of the city were selling coffee, tea, pastries and even soup in favor of a charitable organization. Full list of institutions that participated in the action: here.

"Many thanks to all the businesses who have shared their money with us, to citizens for each cup of coffee drunk! The use of "Express -aid" not just in money raising for the shelter, in addition people will learn about the shelter itself, about the problem of homelessness and how to bring people back from the streets to a normal life, “for real,"-says Anastasia Sadovnikova, the”Express-Aid”campaign coordinator.

The restaurants participating noticed that visitors consciously came to them in a day of action to support the”Nochlezhka”.

"On June 27, we even had a man who especially came to give 50 rubles for a cup of coffee in favor of "Nochlezhka", but asked not to make it because he doesn’t drink coffee ," tells us the staff of the ”Phonotecha” caffe.

"We trust the “Nochlezhka” and know that it brings great benefits to all those who need it. We are confident that the collected during the "Express- aid" funds will go to a good cause," says the owner of the” Mitte” café Vladimir Moskvin.