Main
Новости
On 24th November, Nochlezhka will participate in a press conference on ‘Helping homeless people of St Petersburg in the winter of 2015-2016’

On 24th November, Nochlezhka will participate in a press conference on ‘Helping homeless people of St Petersburg in the winter of 2015-2016’ 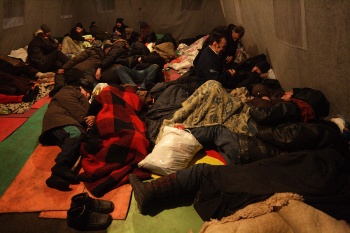 At 11 a.m. on 24 November the TASS Press Centre will hold a press conference titled ‘Helping homeless people of St Petersburg in the winter of 2015-2016’.

According to weather forecasts, the temperature in St. Petersburg will drop below zero in December. According to the statistics provided by the city’s registry office, 1,194 homeless people died in St. Petersburg in 2014. Based on the experience of previous years, we can estimate that around half of these people die during winter months. Hundreds more people became disabled as a result of amputations.

The city has previously failed to establish an accessible and efficient system of emergency aid to homeless people during cold months.

Has anything changed since last year, has the city prepared for this winter in order to provide a safe life for those without homes? Which districts will have accessible heating centres where people in need can find warm and safe shelter at night? Are there programmes of social and legal rehabilitation for this part of the population?

Participants of the press-conference:

2. Head of the Social Programmes department of the Committee for Social Policy of St. Petersburg, Sergey Matskevich;

For all enquiries and accreditation: