Nochlezhka’s annual statement is considered to meet the Golden Standard 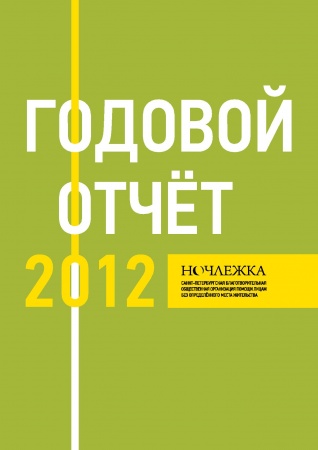 “This year we’ve received many annual statements which show a certain improvement in non-governmenal organizations’ accounting practices. It was hard for our experts to choose one winner among all the strong works sent to us. The comission decided to endorse the jury’s initiative and to give awards to groups, not to individual contestants, as done in international practice”, – says Larisa Zelkova, the vice-chairperson of the Public Chamber Comission of Charity and Volunteer Services Development of Russian Federation.

The comission considered “Nochlezhka”’s annual statement to fit in the best “Golden Standard” category, together with the annual statements of 19 other contestants. There were 174 entries to the “Starting Point” contest, and 157 of them were approved.

“The main principles of “Nochlezhka”’s work are openness and tranparency. Our annual statements are meant to inform about all our projects and all the donations received and spent. From year to year our annual statements become more and more professional, thanks to our eployees and volunteers. In these statements people can see the results of our work, and people’s trust is very important for us”, – says Grigory Sverdlin, the director of “Nochlezhka”.

Last year “Nochlezhka”’s annual statement was nominated for awards in the categories “The Best Annual Statement of an Organization with 5-15 mln Roubles Budget” and “The Best Representation of the Organization’s Funding Sources in an Annual Statement”, and took the first and the second places respectively.