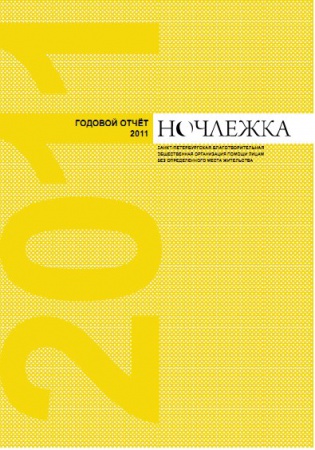 The national competition “The Point of the Report” is organised by the commission for development of charity and voluntarism under the Civic Chamber of the Russian Federation, in partnership with the Non-commercial Organisations’ Development Centre, the grantee organisation “Donor Forum’s” Non-Commercial Partnership, and with the Social Information Agency which is supported by Ministry of Justice, the Ministry of Economic Development and the company Evolution and Philanthropy. Nochlezhka was presented with a certificate, signed by the Ministry of Justice, showing that the organisation’s report is in line with legal standards.

“This award shows that Nochlezhka’s activities are as open and transparent as possible. The report is one of the best that were entered into the competition and one of my favourites.” said Inna Ivanovskaia, coordinator of the Non-commercial Organisations’ Development Centre’s “Annual Report Competition”.

“Openness is a foundational principle of our work. Winning the competition “The Point of the Report” and the recognition of the transparency of Nochlezhka’s activities is important to us. There is never a lot of trust on the part of the citizens, the authorities and business.” Said Grigorij Sverdlin, director of Nochlezhka.