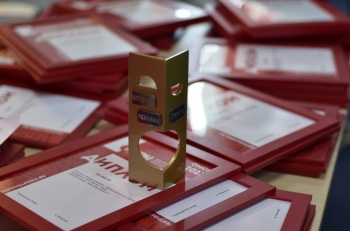 Nochlezhka projects won the VII international festival of social advertising "P.O.R.A": graffiti campaign "This aspect of life" won gold among professional works, campaign in the Letnij Sad "Marble people against stone hearths" got the second place in the same category.

"This aspect of life" graffiti campaign took place in August when images of homeless people with an inscription that more than 4000 homeless die in St. Petersburg streets annually were placed on temporary fences. The tablet with the words resembled blockade warning Leningrad people of danger. In time of peace the most dangerous aspect of life is when society is indifferent to homeless people.

The campaign "Marble people against stone hearts" took place in Letnij Sad in September. Statues "expressed" the complexity of life on the street and human indifference. Marble people, as well as the homeless, are constantly in the street. But many come to look at the statues while keep turning away from the homeless.

Advertising agency “Great” developed both projects for Nochlezhka, being an old partner of this charitable organization.

Social ad project "Open Air Living" created by “Great” also won first place at the P.O.R.A festival. Then homeless Petersburg people were depicted by Yury Molodkovets in famous historical places of the city which they can admire day and night. Ceremonial Petersburg opposed to Petersburg difficult for life and indifferent to the inhabitants.

"Besides obvious difficulties which homeless people face, they suffer very much from indifference of the society. Victory in the "P.O.R.A. " festival once again confirms that the Great projects are a professional way to change the attitude towards homeless people", – says Grigory Sverdlin, director of SPb Nochlezhka.

"Our government is ruthless to the weak. So the job of people living in this country is to help each other. Do whatever you can, whatever you are good at. We are glad to be friends with Nochlezhka as together we manage to create bright campaigns which, I hope, help to pay attention of people to very difficult life of the homeless", - says Dmitry Makarov, creative director of “Great” advertising agency.