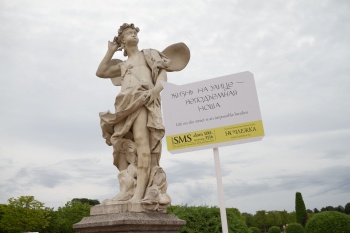 The Marble People vs. Stone Hearts event will take place in Petergof.

Nochlezhka will hold the second Marble People vs. Stone Hearts event on August 14-17. This time it will take place at the state conservatory and museum Petergof.

Talking sculptures will be available in both Upper and Lower parks of the Petergof conservatory and museum. The plaques will have the statues’ messages for the city residents: “Fate and marble can both crack,” “Art is protected; people are helpless,” “Marble people are watched, live ones are turned away from.”

The general director of the Petergof museum conservatory E. Yalnitskaya says “Petergof is happy to take part in this event. If we can help the homeless people, we should do it. Of course, the statues of the Lower Park don’t look much like the homeless people. They live in a protected space; there are people to take care of them and take interest in them. So I can’t say that they have much to complain about. But you can’t argue that they live outside. They know what our climate is, what the wind from the Baltic is, what a rain that goes on for a whole day is. Their lives are not simple. Besides, Petergof residents, members of the Romanoff house, always took care of the nation. Russian emperors thought of themselves not only as rulers, but as protectors and guardians of their people. Throughout their ruling, they supported various special institutions helping people of the lower class, sick and homeless. This event also happens at a time when Russia is celebrating 100 years anniversary from the beginning of the First World War. During that time all women of the dynasty, first of all the empress and her young daughter, took on themselves the functions of nurses and other charitable activities. The entire Russia knew about that. So now let the Petergof event help people!”

“There are more than 60,000 homeless people in the city, and it seems very important to me that their voice should be heard. It’s important that everyone understands that anyone can become homeless. Today none of us are protected. It’s crucial that people know that homeless want to get away from life on the streets, but it’s very difficult to do on one’s own. They just need a bit of help,” - says Grigorii Sverdlin, Nochlezhka director.
“Our world is full of paradoxes! One of the paradoxes is that often we value art more than human life. So, when art objects start talking to you about the problems of the homeless people, it allows the message to reach the people’s hearts faster. And who, if not the park sculptures, will have things to say about life on the street, under the sky?” - says Dmitry Makarov, the creative director of Great.