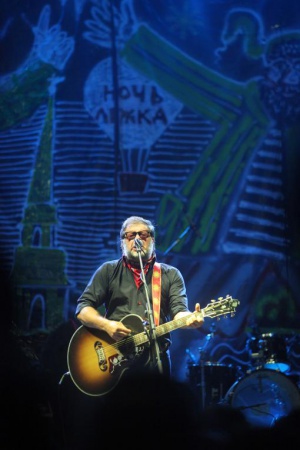 The charity music festival NochlezhkaFest, in support of homeless people, took place on 6 September in St Petersburg. In total 816 tickets were sold and the hall was nearly full. At the concert the audience gave 37 570 roubles to the work of the organisation.

The donations together with the proceeds from the ticket sales will last for several months work of the shelter for homeless people at 112B Borovaia. During this time, 30-40 persons will return to normal life with the help of the lawyers and social workers at Nochlezhka. This is the biggest shelter in the city and the only one to which undocumented persons have access. There is space for 42 men and 12 women.

The festival saw performances by Boris Grebenshchikov, Iurij Shevchuk, and the groups Zorge and Markscheider Kunst. The decorations for the event were made by the “Mitkis” Dmitrij Shagin, Nikolai Vasiljev and Andrej Kuz’min.

The musicians reminded the audience several times of the importance of showing compassion and support for people who have ended up on the street and about how no one is completely insured against the loss of one’s home.

“To help people, to do something good for people, is the highest pleasure available to humans. If a man denies himself this, he will regret it.” says Boris Grebenshchikov.

“We are very grateful to all the people without whom this festival wouldn’t have taken place: the musicians who didn’t charge a penny for their performances, the artists who decorated the place for free, the club which let us use space free of charge. A big thank you to the festival’s sponsors, our volunteers and employees! Thanks to these people, the shelter can continue its work. And it shows that our society is ready to help those in need.” Says Grigorij Sverdlin, director of Nochlezhka.

The shelter on 112B Borovaia is not just a roof above your head and food for the day for its inhabitants. During a person’s stay, Nochlezhka’s lawyers and social workers help those who need it to get their documents in order, to get admitted to long term medical or social programmes, find work or housing. The psychological support offered by volunteer psychologists is also part of the return to a normal life.

In 2011, Nochlezhka’s shelter received 172 persons. In addition to getting food and a roof over their head, with the help of the lawyers and social workers, 40 people found both work and housing, 18 found a place to live with relatives, 12 were admitted to the city’s night shelters and 9 were admitted to care homes.