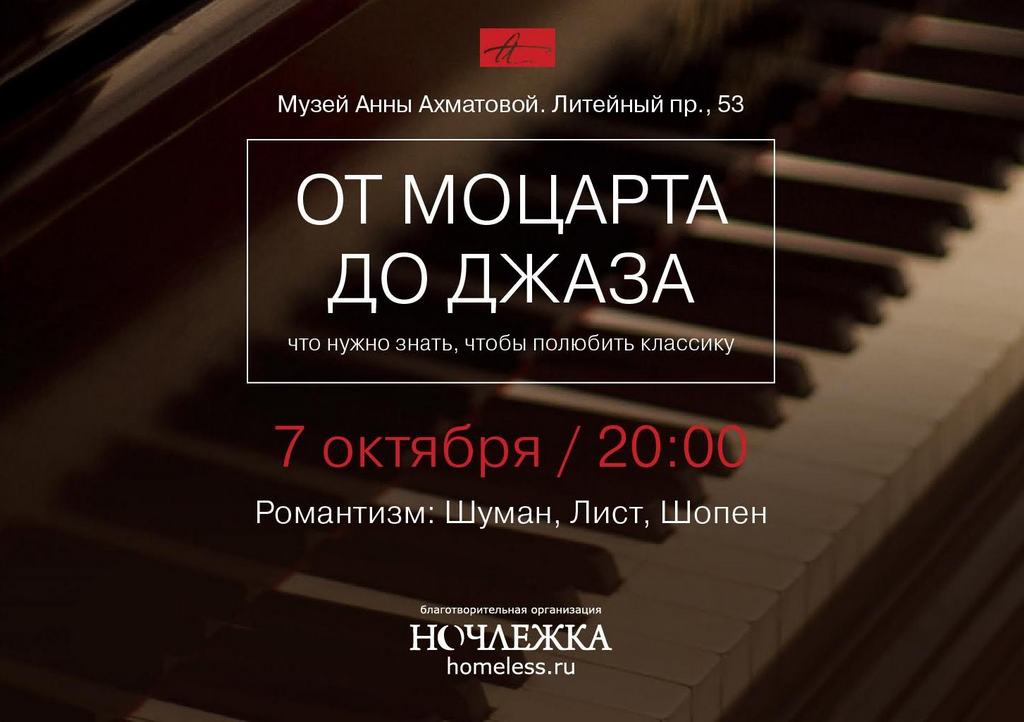 On Friday, 7 October, Nochlezhka will organize the third concert of the ‘From Mozart to Jazz’ series; this time the theme is ‘Romanticism: Schumann, Liszt, Chopin’. It will start at 8 p.m. at the Anna Akhmatova Museum (53, Liteinyi prospect).

Olga Skorbiashchenskaya, who teaches at the Conservatoire, will speak at the event about Romanticism in music and about its connection to the romantic direction in literature, fine arts and philosophy. The works of Schumann, Liszt and Chopin will be performed by the pianist Natalia Uchitel.


Since last summer, Nochlezhka has been organising a series of concerts titled ‘From Mozart to Jazz’. During these concerts professional musicians talk about the most important stages in the history of classical music in an accessible and fascinating way. A café at the Fountain House opens half an hour before the performance, and all its revenues go towards our charity.


‘One does not have to dress up or have a particular state of mind to start appreciating classical music and to get to distinguish between the works of different composers while listening to them’, says Natalia Uchitel.


The tickets cost 500 roubles. All the revenues will go towards running the ‘Night Bus’ which delivers hot meals to 150-200 hungry people every weekday.

During the first two concerts of the series ‘Nochlezhka’ collected 118,600 roubles. This money was enough to cover 15 days of running the Night Bus project.