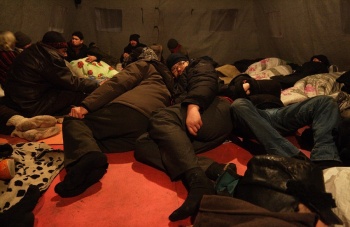 At 8 pm on December 1st, Nochlezhka charity organization, the administration of Kalinisky area, and the committee on social policy are opening the first heating point of the 2015-2016 season at Neyshlotsky street, by buiding 23. The heating tent will be available for the homeless people at 8 pm.

The heating point is a heated tent designed for up to 50 people where anyone in need can spend the night in warmth and safety and receive a free dinner and breakfast.

“The main goal of the state social workers at places like this and Nochlezhka volunteers, who provide comprehensive assistance, is not only in fulfilling the clients’ basic needs, but in finding people in need of social services, including shelter and medical help” – say the representatives of the department of social protection of the population at the administration of Kalinisky area of St. Petersburg.

Nochlezhka plans to open the second heating point on Thursday, December 3rd, at Prospekt 9 Yanvarya in collaboration with the administration of Frunze area and the committee on social policy.

During the last cold season, from December 1st 2014 to March 31st 2015, 361 people found shelter in the three heating points provided by Nochlezhka, spending 5107 overnight stays there. On average, each tent had 30 residents per night.

42% of these people were St. Petersburg residents; 10% were residents of Leningrad region; 42% were Russian citizens from other areas of the country, and 6% were citizens of the former USSR countries.

According to the official data, 1194 people without permanent residence died in St. Petersburg in 2014. Based on the data from the previous years, approximately half of these people died in the winter. In addition to this, hundreds of people became disabled after amputations.

Last winter there were only two other places besides the heating tents provided by Nochlezhka where any person in need could receive shelter without bureaucratic obstacles: The Maltese Assistance Service provided a tent in Primorsky area and another place is available in Admiralteysky area.

“We have been trying for years to make sure that every city area has at least one heating point for the homeless people. A place for a heating tent can be found at any part of the city, so that people don’t have to walk across the entire city in search of a safe place to spend the night. Unfortunately, we have reasons to believe that the statistics of this winter will not be less sad than in the previous years” – says Andrey Chapaev, the coordinator of the heating points project at Nochlezhka charity organization.